By Gwinnett Park Life on May 14, 2009@gwinnettparks 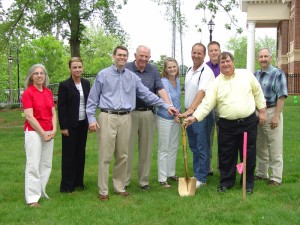 Taylor Park on the Town Green will soon reflect the sounds of Duluth’s History as the City broke ground on a new playground project.  The ½ acre park located on Main Street in front of City Hall will be the home of a train theme playground which will include a miniature train depot, train set with steam engine, passenger car, tanker car and caboose.  The improvements will also include a train junction with slides, climbing, and crawling equipment. The $261,500 contract was awarded to Ed Castro Landscaping from Roswell. Construction is expected to be completed in August of 2009.  Taylor Park was first opened in 1996 after it was donated to the City by the Kelley Family.

For more information please contact our Parks and Recreation Director, Kathy Marelle, at 678-417-9269 or kmarelle@duluthga.net.