This year Jones Bridge Soccer’s (JBS) U14 Breakers won Georgia’s fall cup in November with one team, and swept through their spring season undefeated with a brand new young team.  They scored an unprecedented 64 goals with only 2 goals against winning their Division.  Then the Breakers won their District May 16-17 against the mighty SDY Jaguars to go to the State Championship in Columbus May 22-23, 2010. 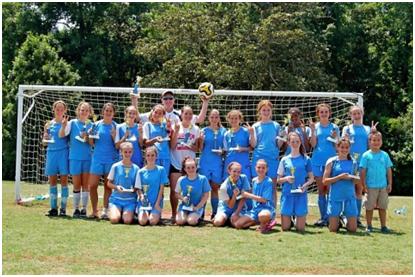 In the state round they faced off with the KFC Tigers in a 3-0 victory.  In game two they beat the Villa Rica Chargers 1-0, and in game three beat the Hinesville Gators on Sunday morning 2-1.  Making it to the championship game Sunday afternoon was a feat for this brand new team.  Battling the older and former select LSA Jaguars, the final game ended in a 0-3 loss for the Breakers, leaving them the second ranked team in Georgia.

The Breakers play out of Jones Bridge Park on East Jones Bridge Road in Peachtree Corners.  JBS was affiliated with Georgia Soccer two years ago, and is growing strong as they welcome the following five new teams to the club:  two U12 girls teams, the U14 Lady Shockers Nation, the U16 Lady Shockers Nation, and the U16 Breakers.  The club plans to have a boys and girls league for Fall 2010 with the addition of five new girls teams.  For more information go to www.pbcsports.net or leave a message on the hotline # 678-587-8889.