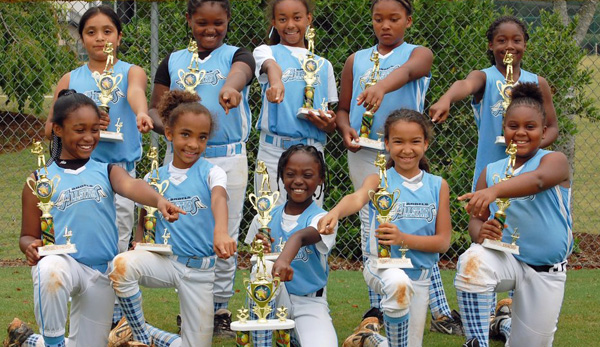 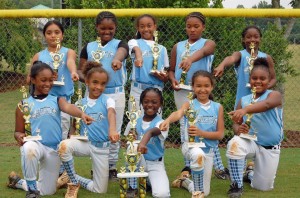 Shiloh Athletic's All Start U8 Girls

The 2012 8u Angels All-Stars have accomplished something that no other team in the history of the Shiloh Athletic Association has ever done. They brought home a championship trophy. And they did it not just once but twice. The team is comprised of ten young ladies who play their hearts out in every game. Led by head coach Charlie Walker and assistant coaches Jaun Quero, George Brown, Brook Smith, and Reuben Phillips; the team consists of #1 Lauryn Peppers, #2 Kennedy Broughton, #4 Aaliyah Smith, #5 Brianna Cox, #10 Kiriah Lovett, #19 Kelsie Walker, #20 Awtum Lewis, #21 Imani Washington, #27 Tahjanee Phillips, and #33 Lidia Quero. Consisting of 5 players from both of SAA’s 8u regular season teams, who had an impressive 25-3-2 combined record against teams from Mountain Park, Brookwood, South Gwinnett and Duluth.

The All-Star team has continued in the same manner as the regular season teams. In their first appearance at the South Gwinnett Summer Classic Tournament they had a 7-1 record over two days winning 6 games on Sunday (6/3) to clinch the championship over the all-star team from Buford who they had to beat twice. On Sunday (6/10) they brought home their second championship trophy from the Pre Tri-County tournament where they faced teams from Walton Co., Norcross, and Peachtree Ridge. They won four straight games to win this tournament. The continued success of the team is contributed to hard work and determination from the girls as well as their dedicated coaches. The girls are preparing along with the rest of the All-Star Angels from SAA to compete in the 2012 Tri-County Tournament at Buford City Park 6/15-6/23.

Related ItemsfeaturedShiloh Athletic AssociationsoftballU8 Girls
← Previous Story GWINNETT COUNTY PARKS TRAIL DESIGNATED AS NATIONAL RECREATION TRAIL
Next Story → GET UP, GET OUT AND EXPLORE YOUR PARKS!