The Norcross Soccer Recreational program offers youths, ages 4 – 18, the opportunity to play soccer “just for the fun of it.” This recreational program is considered a developmental or “learning” program. “The philosophy is for players to develop a love for the game of soccer while learning new skills and having fun with new friends.”

Norcross Soccer’s Fall starts in September to November, with practice beginning in August. 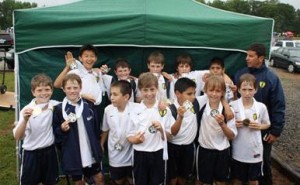 The U11 Gold team won their second tournament of the Spring season with a convincing 5-2 win in the final having not conceded a goal & unbeaten in the previous 3 games prior to their emphatic final win. Scorers in the final, Victor Munoz 2, Murphy McCullough 2, Michael Williams 1.

Each season consists of approximately ten games usually held on Saturdays. Games are played at the Pinckneyville Park soccer complex and, for U14 and above, at other venues in metro Atlanta.

On Line Registration runs to July 19th. Visit http://www.norcross-soccer.org/index.html for more information and registration on line.